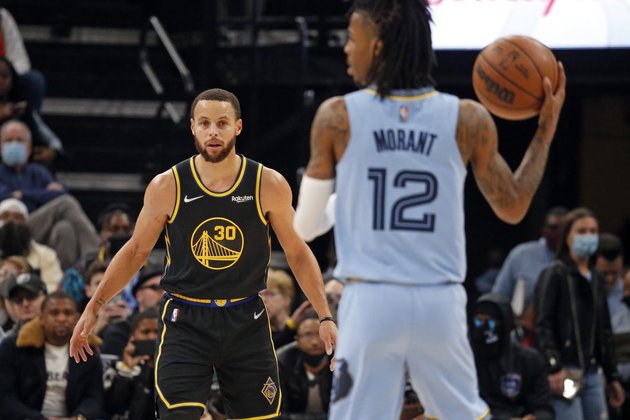 One of the NBA's best budding rivalries will be renewed Wednesday night when the Memphis Grizzlies and Golden State Warriors duke it out again in San Francisco.

The Nos. 2 and 3 seeds in last year's Western Conference playoffs will be meeting for the second time this season, with Golden State using a 40-point, third-quarter explosion to run off to a 123-109 home win on Christmas.

That head-to-head was the first since a heated Western semifinal series last May in which the Warriors' Gary Payton II suffered a broken elbow on a hard foul by the Grizzlies' Dillon Brooks, who was suspended for one game.

Memphis appears to be well-situated for another run at Western Conference -- and perhaps NBA -- honors this season despite having lost three in a row. The Grizzlies' stumble has come after they won 11 straight while vaulting into second place in the conference behind the Denver Nuggets.

The Grizzlies have used a 20-3 home record to build their lofty perch in the standings, and they will look to find their winning touch again in Wednesday's rematch.

The first two of Memphis' three consecutive defeats were heartbreakers, with the Grizzlies coming up one point short against the Los Angeles Lakers on Friday and two points shy of the Phoenix Suns on Sunday.

Exhausted from those efforts, and playing for the third time in four nights on the road, Memphis coach Taylor Jenkins chose to rest Ja Morant and Steven Adams on Monday in Sacramento. The result was a 133-100 drubbing by the Kings.

"Got to look ourselves in the mirror," Memphis veteran Tyus Jones said on the eve of the Sacramento loss. "We gotta want to be better if we want change. And if we don't, it'll be a long road trip for us."

The Grizzlies will end their five-game trip Friday at Minnesota.

The Warriors were without Stephen Curry for the Christmas win over the Grizzlies, but used 32 points from Jordan Poole to nearly offset Morant's 36.

That left the supporting casts to decide the outcome, with Golden State getting 24 points from Klay Thompson and double-figure scoring from four others, while Draymond Green provided his usual dirty work in the form of 13 rebounds and 13 assists.

Like the Grizzlies, the Warriors have been far better at home than on the road this season, although that wasn't the case Sunday, when Golden State opened a three-game homestand with a 120-116 loss to the Brooklyn Nets.

Curry had 26 points in the defeat, but Thompson and Andrew Wiggins combined for just 14 on 6-of-26 shooting overall and 0 of 10 on 3-pointers.

The Grizzlies can expect to see something different than last year's playoffs as Warriors coach Steve Kerr has inserted Poole into the starting lineup in recent games, going with a smaller lineup while shifting center Kevon Looney to the bench.

Poole, who never started in the Memphis series last year, has averaged 26.3 points in his last four starts.

"He seems to play better in the starting lineup for whatever reason. I can theorize (why)," Kerr said. "There is more space when he's playing with Steph. Generally, (opponents) will have a lesser defender on him. It's a good fit."

France military ordered out of Burkina Faso in west Africa

OUAGADOUGOU, Burkina Faso: As Burkina Faso, in western Africa, faces an Islamist insurgency, it is set to end a military ...

As births continue to fall, Japan seeks incentives for parents

TOKYO, Japan: Japanese Prime minister Fumio Kishida said this week that it was "now or never" for Japan, one of ...

US moving towards offering annual Covid vaccines to most Americans

WASHINGTON D.C.: As part of its efforts to simplify the national COVID-19 vaccine strategy, the US Food and Drug Administration ...

WASHINGTON D.C.: US authorities said this week that a surge in Cubans and Nicaraguans arriving at the US border with ...

Japan's Kishida expected to visit Ukraine for talks with Zelenskiy

TOKYO, Japan: The Yomiuri newspaper has reported that Japanese Prime Minister Fumio Kishida is planning to visit Kyiv in February ...

As travel opens up, Thailand prepares for 5 million Chinese tourists

BANGKOK, Thailand: Following China's reopening and the end of its strict COVID-19 restrictions, businesses on Thailand's holiday island of Phuket ...

SEATTLE, Washington: Amazon.com's cloud services division, Amazon Web Services (AWS), has announced that it will expand its data centers in ...

NEW YORK, New York - U.S. stocks crumbled on Wednesday as the extended rally on Wall Street came to an ...