TORONTO, ON / ACCESSWIRE / January 18, 2022 / Vox Royalty Corp. (TSXV:VOX)(OTCQX:VOXCF) ('Vox' or the 'Company'), a high growth precious metals focused royalty company, is pleased to announce that it has executed a binding agreement with a private South African registered company, to acquire two platinum group metals ('PGM') royalties for total consideration of up to C$10,400,000.

Pursuant to the terms of the purchase and sale agreement, Vox will issue C$1,500,000 of Vox common shares (the 'Vox Shares') upon closing and make additional cash payments or issue additional Vox Shares (at Vox's sole election) upon achievement of certain production milestones (the 'Transaction'). Closing of the Transaction remains conditional upon customary approval by the TSX Venture Exchange for the issue.

The royalties include a 1.0% gross receipts royalty over the Dwaalkop Project ('Dwaalkop') and a 0.704% gross receipts royalty over the Messina Project ('Messina', and together with Dwaalkop, the 'Royalties'), which collectively cover the full extent of the Limpopo PGM Project ('Limpopo'), operated by Sibanye Stillwater Ltd. ('Sibanye') (JSE: SSW / NYSE: SBSW). Limpopo was last mined in 2009 via the existing Baobab shaft and concentrator ('Baobab Operation'), which are both in place and subject to ongoing re-opening feasibility studies by Sibanye.

Riaan Esterhuizen, Executive Vice President of Australia stated: 'We are very excited to be adding exposure to a fully constructed world-class 18 million ounce PGM resource with near-term restart potential from a US$10B operator. With mine infrastructure already in place, feasibility studies underway and a financially strong operating partner in Sibanye-Stillwater, we see tremendous upside for these assets. Based on the existing resource alone and not considering the upside from the fact that the resource is open at depth, we see this asset as holding potential to become a high-tonnage, multi-decade operation.'

Kyle Floyd, Chief Executive Officer stated: 'Vox continues to successfully execute its strategy of finding world-class royalties on de-risked operations with meaningful near-term catalysts. This is an extraordinary acquisition that we expect will provide significant value to Vox shareholders for decades to come.' 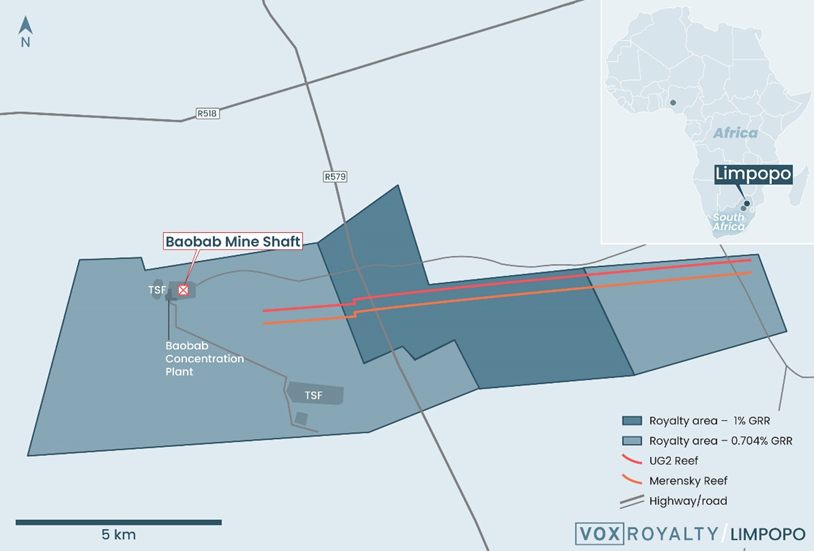 The Limpopo Project is located on the northern sector of the Eastern Limb of the Bushveld Igneous Complex ('BIC') in the Limpopo Province, approximately 250km northeast of Johannesburg and 50km south of Polokwane (Figure 1). The larger project area consists of three contiguous mineral title areas, Voorspoed, Dwaalkop and Doornvlei (all royalty-linked), which are centered around the Baobab Operation on the Voorspoed mining right. The Royalties cover the full project area, with the 0.704% gross receipts Messina royalty applicable over the Voorspoed and Doornvlei properties and the 1.0% gross receipts Dwaalkop royalty applicable over the Dwaalkop property.

The Baobab Operation was a producing operation between 2002(3) and 2009 and reached a maximum extraction rate of 75,000tpm. The mine was placed on care and maintenance in 2009. The mining method applied during this period was conventional down-dip stoping, conventional apparent dip raise, long-hole stoping and mechanised, long-hole stoping.

The recent focus has been on comprehensive studies to deliver an integrated development strategy for Limpopo, which includes not only the Baobab mine but instead incorporates all three properties. A detailed feasibility study was completed by DRA Global Limited in 2017, which proposed a phased approach, starting with the re-opening of the Baobab Operation and then incorporating production from the Dwaalkop and Voorspoed areas via a series of decline portals. Sibanye completed a feasibility study in 2020 and completed a conceptual re-opening study for the Baobab mine, based on a mechanised long-hole stoping methodology. The steep-dipping nature of the Merensky and UG2 Reefs are considered amenable to further mechanisation which fits well with Sibanye's started strategic goals. 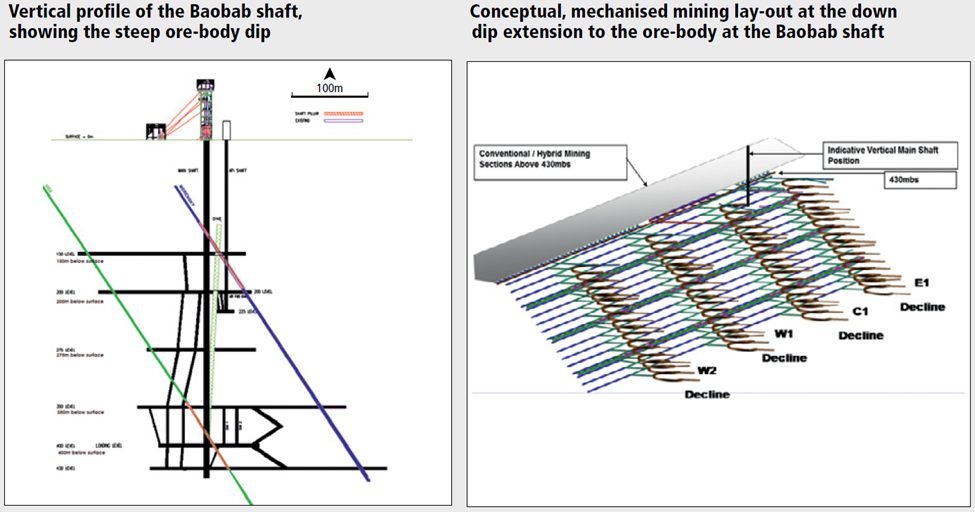 Sibanye holds an attributable interest of 95.3% in the Baobab (Voorspoed) and Doornvlei properties and 45.3% in the Dwaalkop property (a joint venture with Northam Platinum Limited ('Northam')). Northam holds a 50% interest in the Dwaalkop property with minority partners holding the remaining 4.7% interest in each of the properties. The Voorspoed and Doornvlei mining rights were granted on 26 February 2014 and are valid to 25 February 2044, whilst the Dwaalkop mining right was granted in Q3 2021 with final execution of the grant in progress.

Resources outlined in Table 1 reflect the attributable ounces reported by Sibanye and Northam, whilst the resources attributable to minority shareholders was calculated by Vox using the Sibanye resource numbers. Accounting for the 4.7% interest held by minorities and grossing up the resource to a 100% attributable basis, delivers a total resource of approximately 36.4 million 4E PGM ounces on an aggregated Measured, Indicated and Inferred basis. 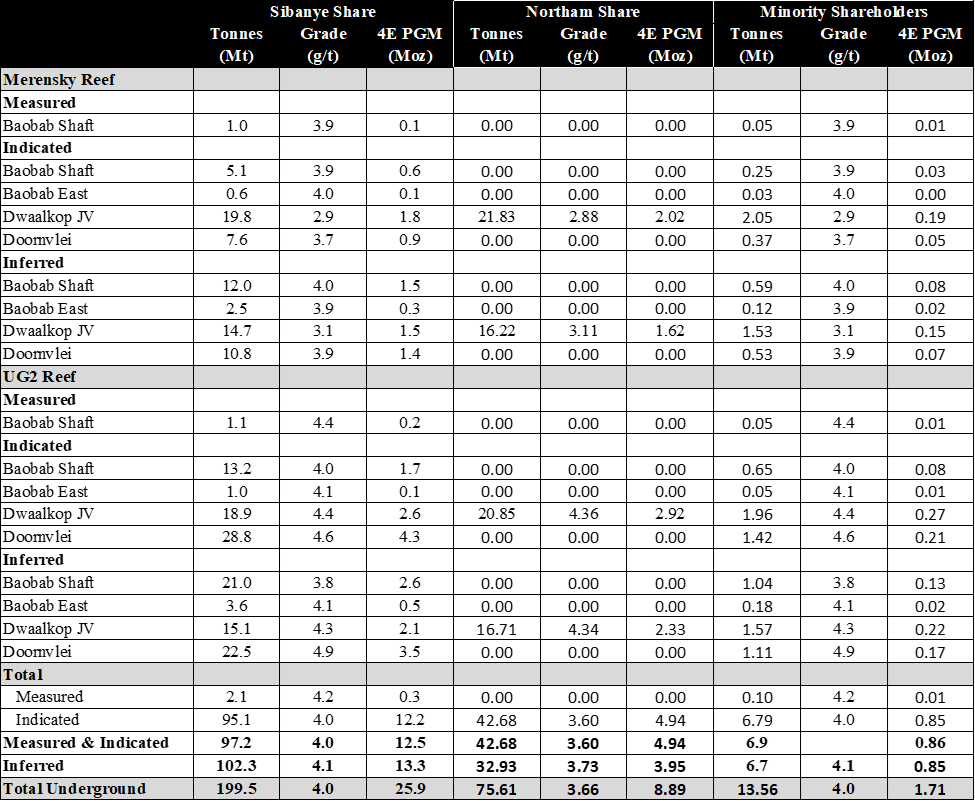 Timothy J. Strong, MIMMM, of Kangari Consulting LLC and a 'Qualified Person' under National Instrument 43-101 - Standards of Disclosure for Mineral Projects, has reviewed and approved the scientific and technical disclosure contained in this press release.

Vox is a high growth precious metals royalty and streaming company with a portfolio of over 50 royalties and streams spanning eight jurisdictions. The Company was established in 2014 and has since built unique intellectual property, a technically focused transactional team and a global sourcing network which has allowed Vox to become the fastest growing company in the royalty sector. Since the beginning of 2019, Vox has announced over 20 separate transactions to acquire over 45 royalties.

Further information on Vox can be found at www.voxroyalty.com.

Should one or more of these risks, uncertainties or other factors materialize, or should assumptions underlying the forward-looking information or statement prove incorrect, actual results may vary materially from those described herein as intended, planned, anticipated, believed, estimated or expected. Vox cautions that the foregoing list of material factors is not exhaustive. When relying on the Company's forward-looking statements and information to make decisions, investors and others should carefully consider the foregoing factors and other uncertainties and potential events.

Vox has assumed that the material factors referred to in the previous paragraph will not cause such forward looking statements and information to differ materially from actual results or events. However, the list of these factors is not exhaustive and is subject to change and there can be no assurance that such assumptions will reflect the actual outcome of such items or factors. The forward-looking information contained in this press release represents the expectations of Vox as of the date of this press release and, accordingly, is subject to change after such date. Readers should not place undue importance on forward looking information and should not rely upon this information as of any other date. While Vox may elect to, it does not undertake to update this information at any particular time except as required in accordance with applicable laws.

Except where otherwise stated, the disclosure in this press release is based on information publicly disclosed by project operators based on the information/data available in the public domain as at the date hereof and none of this information has been independently verified by Vox. Specifically, as a royalty investor, Vox has limited, if any, access to the royalty operations. Although Vox does not have any knowledge that such information may not be accurate, there can be no assurance that such information from the project operators is complete or accurate. Some information publicly reported by the project operators may relate to a larger property than the area covered by Vox's royalty interests. Vox's royalty interests often cover less than 100% and sometimes only a portion of the publicly reported mineral reserves, mineral resources and production of a property.