Strong second half propels No. 6 Arizona past Colorado 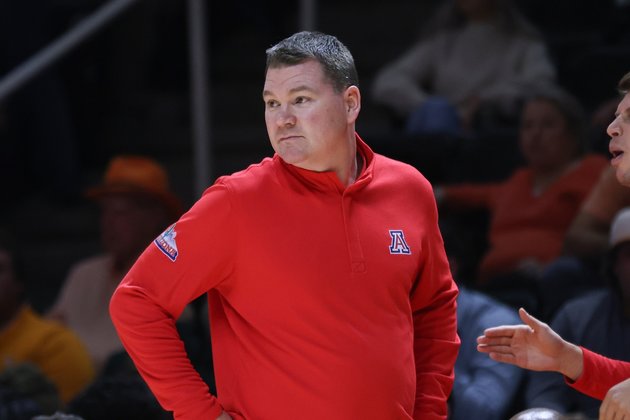 Four Arizona players scored in double figures as the No. 6 Wildcats pulled away in the second half and snapped Colorado's five-game winning streak with a 76-55 decision on Thursday night in Tucson, Ariz.

Colorado's K.J. Simpson, who signed with the Wildcats last fall but was let out of his letter of intent after Arizona fired coach Sean Miller in the spring, scored a career-high 17 points, including 14 in the first half. Evan Battey contributed nine points and seven rebounds.

Jabari Walker, the Buffaloes' leading scorer at 13.4 points per game, picked up two early fouls and was never a factor. He finished with four points.

Arizona's lead was only 34-30 two minutes into the second half before Tubelis fueled a 15-4 run. He scored eight points during that flurry, including his fifth 3-pointer of the season, as the Wildcats roared to a 49-34 edge with 14:02 to go.

Colorado managed to get back within 53-43 but couldn't string together a key run as Arizona stayed hot. The Wildcats shot 56.7 percent (17 of 30) in the second half.

Arizona raced to an 11-2 lead, holding Colorado without a basket for almost the first six minutes. The lead went to 19-6 when Koloko scored in the paint to cap an 8-0 run with 10:44 to go, and Arizona eventually pushed to a 25-10 advantage.

But the Buffaloes regrouped by stopping Arizona in transition and forcing the rest of the half to be played at their favored deliberate pace. Simpson took over on offense, attacking the basket and scoring 10 points in a 16-4 run that cut the lead to 29-26.

Arizona took a 32-28 lead into halftime.

MEXICO CITY, Mexico: In a blow to the country's press corp, two Mexican journalists who had reported their country's slide ...

Water main break causes homes to be evacuated in Washington

BELLEVUE, Washington: Fire officials in Bellevue, Washington said two people escaped from a home that partially slid off its foundation ...

President Biden and the Democrats were highly critical of President Trump's foreign policy, so it was reasonable to expect that ...

AL-ULA, Saudi Arabia: Shedding light on the lives of the ancient inhabitants of Arabia, archaeologists from the University of Western ...

NEW YORK CITY, New York: Telecom companies have rolled out 5G networks in various locations across the United States over ...

WASHINGTON D.C.: The U.S. Department of Agriculture (USDA) has said that this year's orange crop will produce a smaller yield ...

SYDNEY, NSW, Australia - Stocks in Asia fell almost across-the-board on Friday, with the biggest loser the ASX.The Australian All ...

LONDON, England: Consumer prices in the UK have risen at their fastest rate in nearly 30 years, but experts warn ...

The Day the Earth Caught Fire