SYDNEY, AUSTRALIA / ACCESSWIRE / November 26, 2021 / From somewhere in the outback, the first line of Cardano Non-Fungible Tokens (CNFTs) by Cardingo emerged in a stealth drop. Hoskeychains, as they are known, draw their inspirations from the cherished Cardano founder Charles Hoskinson. The collection contains 10k computer generated Hoskeychains of varying rarity and design. These collectibles are a colorful contribution to the CNFT ecosystem while paying homage to the creator, who Cardingo holds in the highest regard. 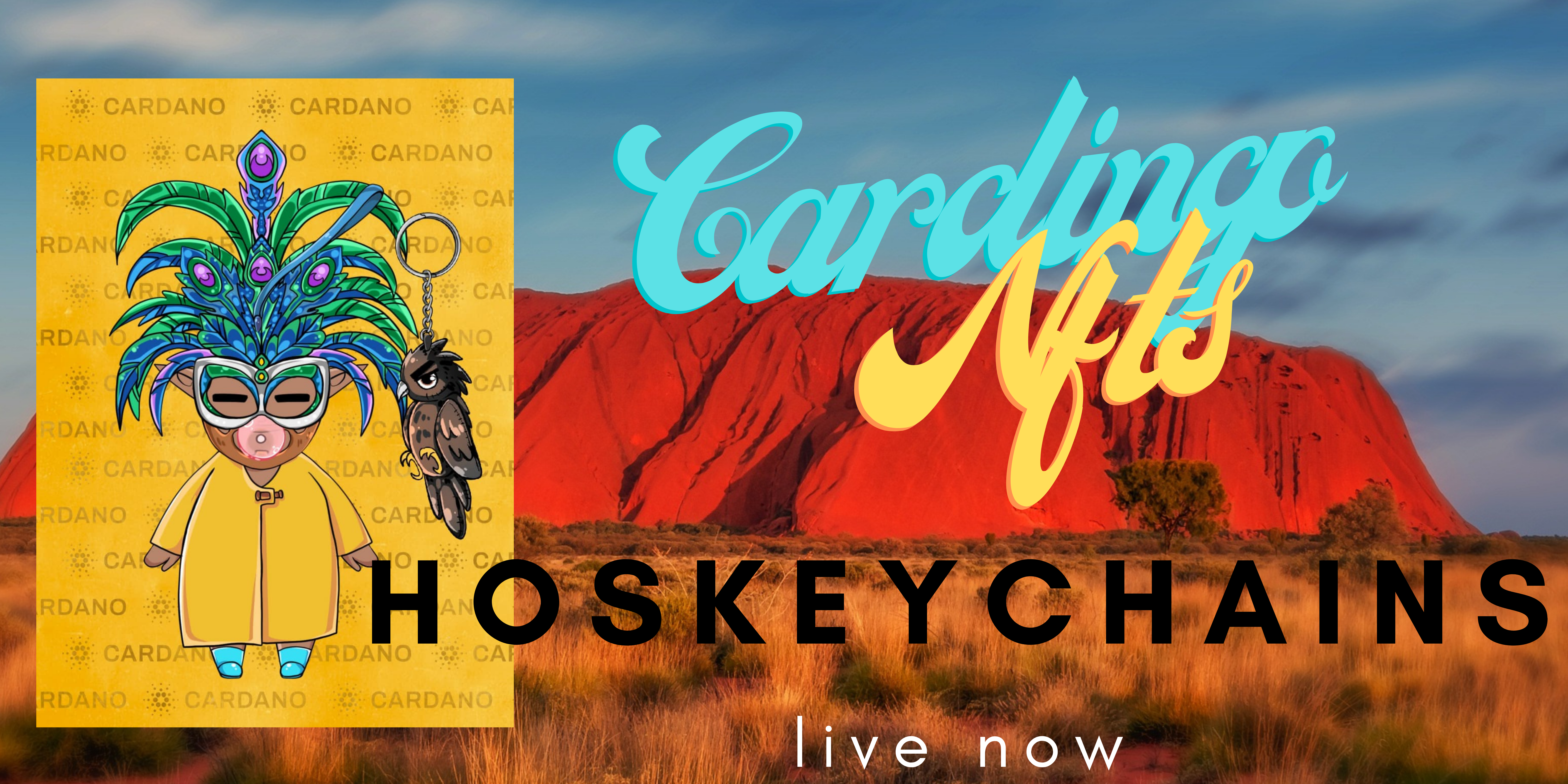 NFTs exploded in value and sales in 2021. The first quarter of 2021 saw 2 billion USD in sales of NFTs. More recently, the third quarter of 2021 boasted a record breaking 10.9 billion USD in NFT sales and the NFT market cap is now surpassing coins like Litecoin, and Bitcoin Cash. That market cap would put the NFT market somewhere around spot number 12 just behind Uniswap.

As Ethereum gas fees show no sign of letting up, many collectors are making the transition to alternative chains to feed their habits. Cardano offers low fee minting and buying for CNFTs and a host of NFT options to satisfy any addict.

Cardingo is an NFT marketplace built on the Cardano blockchain offering a Curated Designer NFT platform that connects talented artists with Cardano fans worldwide. They also seek out Aboriginal and other talented artists to help them monetize their talents in the form of NFTs. The problem with many marketplaces is the oversaturation. Buyers are unable to distinguish between quality new pieces and simple knock-offs. Cardingo solves this by doing the background research before allowing any NFT to be minted on their platform.

Cardingo has several series in the works, and they launched with a series called Hoskeychains. There are 10k CNFTs with a keychain theme and a huge set of traits. All are generated with special AI algorithms and super rare hand picked data sets. These CNFTs have a bonus though. 3D designs of selected Hoskeychains are already under development and in the future, NFT holders can buy an actual physical keychain in the exact design of their NFT and can also be randomly selected to get a physical HoskeyChains keychains. These physical real keychain replications will only be available in a limited supply of 500 and all keychains will be printed with an identifiable and unique serial number to verify authenticity.

Another Cardingo series has just launched and is already selling as well. Hoskeysmokeys depict Charles Hoskinson as a pixelated portrait, puffing away on a cigar. These animated pixels literally blow smoke that falls in messages like 'Degen,' 'Rekt,' 'ADA,' and more.

Hoskeysmokeys are an extremely rare animated CNFT series by Cardingo. These will be deeply desirable, as only 150 artist generated Hoskeysmokeys will be minted. Each has it's own special design, all showcasing Charles engaging in one of his guilty pleasures, a great cigar!

Hoskeysmokeys not only animate Hoskinson smoking, but also blowing the smoke out to reveal a variety of possible phrases related to Cardano, crypto, and other colorful things. This is a one of a kind smokey experience that makes you feel cool even if you think smoking isn't.

Cardano fans are likely to flock to Cardingo. Previously, the team engaged in few of the typical crypto marketing tactics deployed these days. In the spirit of Cardano, they decided to make sure their launch worked, and their NFTs could be sold without a glitch, rather than rush a product to market and fix problems as they arise.

The NFT market is sure to bring some new surprises in the future and Cardingo NFTs are one surprise that is already here.

LONDON, England: The British Broadcasting Corporation (BBC) faces a major financial setback following a recent announcement by the government to ...

US Supreme Court to rule on religious rights of football coach

WASHINGTON D.C.: The U.S. Supreme Court said it would hear an appeal from a former high school football coach who ...

One of world's oldest gorillas put to sleep at Atlanta Zoo

ATLANTA, Georgia: Zoo Atlanta's gorilla, one of the oldest in captivity at 59 years, was euthanized on January 13 due ...

COPENHAGEN, Denmark: An official at the highest level of the Denmark government has been charged with leaking state secrets. Claus ...

LONDON, England: In a statement on January 17, Amazon UK said it has canceled plans to stop accepting Visa credit ...

SYDNEY, NSW, Australia - Stocks in Asia were mixed on Wednesday. The biggest move was the Japanese market which saw ...

UK imports to Ireland fell, trade with N. Ireland up due to Brexit

DUBLIN, Ireland: Since Brexit went into effect in 2020, Ireland has witnessed a 20 percent decline in goods exported from ...

At 3.45%, mortgage rates highest in US since pandemic struck

WASHINGTON D.C.: According to a closely watched survey, U.S. mortgage rates have reached levels not seen since March 2020. In ...

PIEDMONT, Italy: Earlier this month, a case of African swine fever, which can be deadly to pigs but harmless to ...