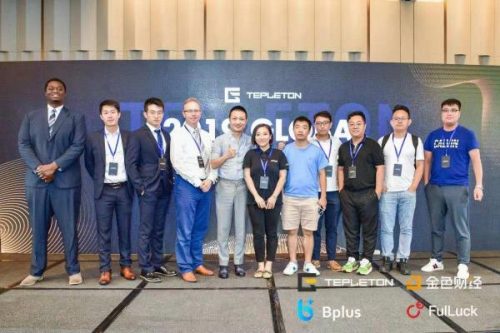 At the beginning of the meeting, Keith Carter, a professor from the National University of Singapore, gave an opening speech. He said that the development of digital financial technology is changing the society and people's lives. As a leader in modern digital finance, Singapore supports innovative technologies such as blockchain and further accelerates Singapore's pace of development in financial technology.

After the opening speech, Tepleton founder and CEO Jaden Tao gave a keynote speech on the theme " Tepleton Protocol - A Brand New Start of Blockchain Finance". In the speech, Jaden Tao proposed the concept of FinBlockchain, the abbreviation of Financial + Blockchain, for the first time on a global scale, and defined it as "an open, credible, efficient, decentralized new economic era based on the underlying technology of blockchain". "FinBlockchain" is based on innovations in traditional finance and internet finance, and is a cross-border bridge between traditional finance and emerging finance.

After the official release of the Tepleton project, Tepleton senior technology architect Taiwo introduced Tepleton's unique advantages from a technical perspective. Tepleton's technical team will continue to break through in the field of blockchain technology, and will be the first to provide the financial industry with a safer, more transparent and more efficient solution to promote the healthy development of the financial industry and enable the blockchain to finance.

The next session is the first panel discussion of the forum, with the theme of "The Opportunity of the New Financial Era in Blockchain", hosted by Jinse Financial VP Tong Yang, Tedenton founder and CEO Jaden Tao, founding partner of Genesisi Capital Sun Zeyu, Qianyuan Capital Wang Lin, the founding partner of Tongzhou Capital Zhang Liaoliao, and CEO of Singapore Sailing Holdings Alex, attended the panel discussion. The guests had a topical confrontation between new finance and traditional finance.

In this regard, Jaden Tao said: "There are not so many new and old, as I said earlier, the FinBlockchain is proposed to solve the problems in the old financial system, including centralization, opacity and other pain points, and now there are too many New technology, we need to combine it with finance to solve some existing problems."

Then Professor Krzsztof Piech, leader of the Polish government blockchain consultant, gave a speech on the theme of "Implementation of Blockchain in Finance and Banking". The professor said that the traditional financial field is welcoming its third information revolution. The first round was the birth of computers in the 1980s and 1990s; the second was the arrival of the Internet in the early 20th century; and the third wave was blockchain technology. After experiencing the cryptocurrency market - the ICO wave and bubble, and then the rise of the IEO and Staking economy in 2019, the blockchain trend in 2020 is even more worth looking forward to.

Next is the second panel discussion session, with the theme "How Do Exchanges Empower Quality Projects", hosted by Shang Silin, co-founder of Mars Finance, and the guests including Vice President of OK Group, BiKi Founder and CEO Li Xiandong, KuCoin Co-founder Johnny, LinkVC founder Lin Jiapeng and chairman of KEX Group Yin Xiaogang.

BiKi founder and CEO Li Xiandong believes that, in essence, the development of the entire digital currency industry is centered around the innovation of asset issuance. IEO is a long-term asset issuance method. As the financial market matures, due to the exchange's right to speak is larger than projects, there will be a situation where certain assets are launched at several exchanges at the same time. The exchange industry is an incremental market industry, and now the exchange order is in a state of constant subversion. Compared to the head exchange, new exchanges like BiKi will seize the competitive opportunity in a more cutting-edge and more flexible way.

After the panel discussion, the event was also commemorated, and the 2019 Global FinBlockchain Forum & Tepleton Launching Conference ended successfully.

It is understood that Tepleton, a new financial solution of blockchain based on the most secure and highest performance underlying cross-chain technology at this stage.

Tepleton is hailed as the ultimate solution for the financial industry. Combined with DPoS consensus mechanism of Byzantine Fault Tolerance security consensus, it can effectively ensure the rapid circulation of information and transactions on the main chain, and also ensure that the main chain will not be attacked by malicious crackers through Center and partition isolation. Therefore, it has such characteristics as security, high performance and consistency.

The final vision of Tepleton team is to advance the global finance into the new era of blockchain, make the personal assets and transactions truly return to users, and drive the healthy development of the financial industry. During the continuous improvement and enrichment of ecosystem, Tepleton will gradually return to the community. The final ecosystem will be in the ideal state of construction and governance by all, which requires the joint efforts of all participants in the ecosystem.

Tepleton will be launched on BiKi on September 6 and will be listed on the KEX, Coineal, Lbank, AOFEX, Bitmart and WBFex exchanges.

WHO declares 'progress' in fight against coronavirus

The World Health Organisation on Wednesday hailed "tremendous progress" in the fight against the deadly new coronavirus since it emerged ...

Whereabouts of concelebrating priests not established at Pell trial

Dr Chris Friel takes another peek at one of the aspects that form part of the child sexual abuse case ...

It is a craven, indefensible choice. On Tuesday, European Union foreign ministers agreed to launch a mission in the Mediterranean ...

DAMMAM, Saudi Arabia - A baby boy kidnapped from hospital 3 hours after he was born more than twenty years ...

NEW YORK, New York - U. S. stocks were solidly higher on Wednesday. The dollar too made good ground, particularly ...

MOSCOW, Russia - An international appeals court in the Netherlands has ordered Russia to pay $50 billion in compensation to ...

Stocks in Asia on the rise, euro trades at 3-year low

U.S.-India trade deal not expected during Trump visit next week

WASHINGTON, DC - President Donald Trump has signalled that a "big trade" deal might not be on the agenda during ...

NEW YORK, New York - Wall Street was sharply weaker on Tuesday, joining a global meltdown in stocks. Only the ...

HONG KONG - HSBC, the largest of Hong Kong's three currency-issuing banks, said on Tuesday it plans to cut as ...