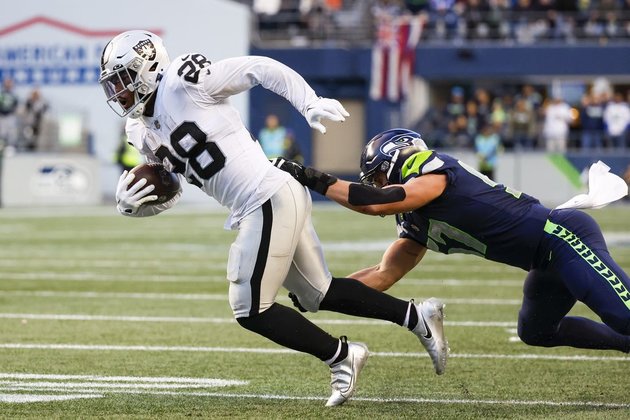 Josh Jacobs deserved to be off his feet this week.

Coming off a record-breaking performance and workload that likely aggravated his calf strain, Jacobs is expected to be back in uniform for the Las Vegas Raiders when they host the Los Angeles Chargers on Sunday.

Jacobs rushed for a franchise-record 229 yards and two touchdowns on 33 carries in a 40-34 overtime win against the Seattle Seahawks last Sunday, scoring the game-winning TD on an 86-yard run.

Jacobs also caught seven passes for 74 yards, giving him 303 yards from scrimmage, another franchise record and the seventh-highest total in the Super Bowl era.

The league leader in rushing yards and yards from scrimmage wasn't expected to practice much in the days leading up to the rematch with the Chargers.

Jacobs rushed for 57 yards on just 10 carries in Las Vegas' 24-19 loss to the Chargers in the season opener. The Raiders fell behind 17-3 at the half before abandoning the run in the second half.

The Raiders started the season with three straight losses, thought they were back on track after winning two of three, but then lost three in a row again.

Las Vegas (4-7) has bounced back with two straight wins in overtime, both on the road, keeping its playoff hopes alive.

The Chargers (6-5) are also trying to build off an emotional win.

Los Angeles elected to try for a two-point conversion, rather than a game-tying point-after, with 15 seconds left against the Arizona Cardinals last Sunday, and the gamble succeeded. Justin Herbert's pass to Gerald Everett gave the Chargers a 25-24 road win that prevented them from losing three in a row.

"We're just living week to week," Chargers coach Brandon Staley said. "It was about this game for us and pouring (everything) into this game and doing what we felt like was going to win us the football game."

Herbert is coming off one of his better performances this season, as he completed 35 of 47 passes for 274 yards and three touchdowns with no interceptions.

The only other time this season that Herbert threw at least three touchdown passes without an interception was in the season-opening win against the Raiders.

Keenan Allen is also back in rhythm with Herbert after the veteran wide receiver missed a month due to a hamstring injury, and running back Austin Ekeler continues to be a multi-pronged threat for Los Angeles, much as Jacobs has been for the Raiders.

Ekeler said all that matters is adding to the victory total.

"At this point, all games for us are like a must-win," Ekeler said. "You see the rest of the AFC winning games ... we got to catch up a few."

The Chargers could be thin on the offensive line, however.

Los Angeles center Corey Linsley was still in concussion protocol on Wednesday. Right tackle Trey Pipkins III aggravated a left knee injury against Arizona, and the Chargers plan to be cautious with his return to practice, Staley said.

Raiders cornerback Nate Hobbs, out since mid-October due to a hand injury, hopes to return to action on Sunday.

ISLAMABAD, Pakistan - Former President General (retd) Pervez Musharraf died in a Dubai hospital on Sunday at the age of ...

Up to 2,000 Israelis to be housed in new town on Gaza border

JERUSALEM - Israel on Sunday announced plans to build a new town on the Gaza border .The town, temporarily named ...

US cancels over 1,800 flights due to ice storm

CHICAGO, Illinois: After an ice storm ravaged states from Texas to West Virginia, this week, airlines canceled over 1,800 flights ...

PRAGUE, Czech Republic: Ahead of her visit to Taipei, Marketa Pekarova Adamova, Speaker of the Czech Lower House, reiterated to ...

US ending Covid emergency programs on May 11

WASHINGTON D.C.: The Biden administration said this week that it will end US COVID-19 emergency declarations on 11th May, nearly ...

At US urging, Japan to stop exporting chip technology to China

TOKYO, Japan: Japan is preparing to revise legislation to allow it to restrict the export of advanced semiconductor manufacturing equipment ...

TOKYO, Japan: Honda has announced that it will manufacture a new hydrogen fuel cell system, which was jointly developed with ...

As prices of EVs fall, manufacturer Rivian to reduce workforce by 6%

IRVINE, California: In an effort to cut costs in preparation for an industry-wide price war, electric vehicle manufacturer Rivian Automotive, ...

SANTA CLARA, California: One week after Intel forecasted lower-than-expected sales caused by a loss of market share to rivals and ...

WASHINGTON D.C.: As part of a wider policy drive to increase competition in consumer markets, President Joe Biden has announced ...