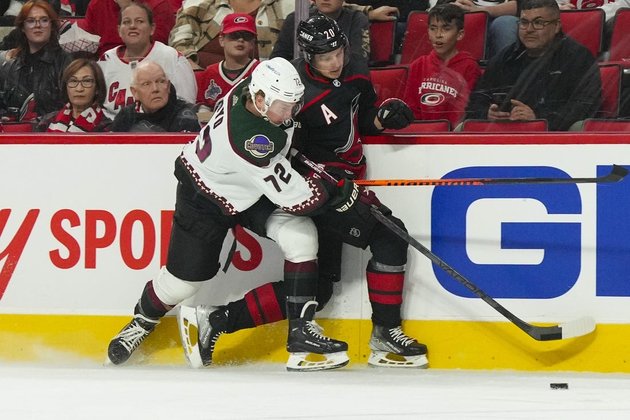 Arizona's Lawson Crouse scored twice, Karel Vejmelka notched his second shutout of the season and the Coyotes beat the Carolina Hurricanes 4-0 on Wednesday in Raleigh, N.C.

Vejmelka stopped all 36 shots by the Hurricanes en route to his third career shutout in his 61st NHL start.

Arizona, which won for the first time in its past five outings (1-3-1), supported the Czech goalie by blocking 30 shots.

Nick Schmaltz scored his first goal of the season on Arizona's only first-period shot, and Nick Bjugstad added a marker. Shayne Gostisbehere and Dylan Guenther had two assists apiece as the Coyotes won for the fourth time in their past 16 matchups with Carolina (4-10-2).

Arizona's Zack Kassian (lower body) was activated off injured reserve and played in his first game this month.

Earlier in the day, Carolina goaltender Pyotr Kochetkov -- who had played just seven NHL games -- signed a four-year, $8 million contract extension. He got the start and made 23 saves, but the Hurricanes fell to 0-1-3 in their past four outings.

Suiting up for just his second game after sustaining an upper-body injury on opening night, Schmaltz scored when he finished off a two-on-two rush with a wrister past Kochetkov just 66 seconds into the contest.

Arizona went on the penalty kill down two men for a span of 1:20 when Crouse knocked a puck over the boards from his defensive end for a delay of game at 7:10 of the first.

The Coyotes' penalty-killing unit was solid, though, and Vejmelka stopped 14 shots as the visitors held a 1-0 lead.

At 1:19 of what turned out to be a scoreless second period, Kochetkov finally made his first save. Arizona outshot Carolina 13-10 in the middle period.

Just after the expiration of a power play that carried over into third period, Crouse found a loose puck in the low slot and backhanded his eighth goal at 1:52 to put the Coyotes up 2-0.

At 9:14 of the frame, Bjugstad outworked Jordan Staal in front of Kochetkov on a putback for an insurance goal, his fourth marker.

With less than four minutes left, Carolina pulled Kochetkov, but Crouse scored into an empty net at 17:53 to seal the win.

ACCRA, Ghana: Ghana's Vice-President, Mahamudu Bawumia, said on Facebook this week that due to dwindling foreign currency reserves, the country's ...

LOPS ANGELES, California: To deter shoplifters and thieves during the post-COVID-19-pandemic rush of holiday shoppers this year, many U.S. retailers, ...

WASHINGTON D.C.: Republican leader in the U.S. House of Representatives Kevin McCarthy said that he would form a select committee ...