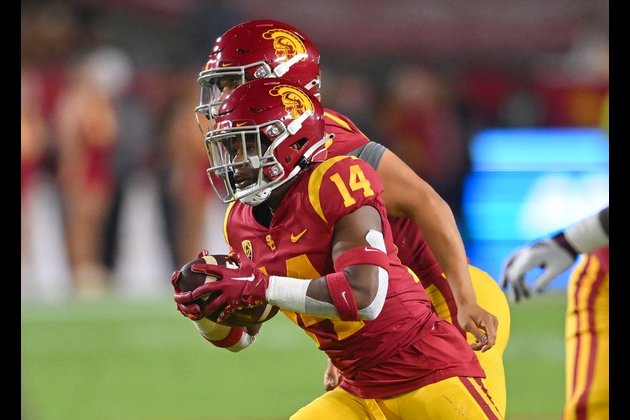 Caleb Williams passed for three touchdowns and rushed for another, and No. 6 Southern Cal held off Pac-12 Conference counterpart Arizona State 42-25 Saturday in Los Angeles.

The Trojans (5-0, 3-0 Pac-12) faced a stiff challenge from struggling Arizona State, which came in on a three-game losing streak and with losses in five of its last six games against FBS opponents, dating to last season.

USC held just a 21-17 advantage at halftime and committed its first turnover on the season when Williams was intercepted by Timarcus Davis shortly after intermission. However, USC held the Sun Devils scoreless until late in the second half to pull away.

The Trojans built a cushion over that stretch, first with a 2-yard Travis Dye touchdown carry, then Williams' 2-yard scoring pass to Kyron Hudson.

Arizona State (1-4, 0-2) ended its second-half drought when Xazavian Valladay scored his second touchdown of the game with 6:16 remaining in regulation. Valladay's 2-yard touchdown run followed a 29-yard scoring reception from Emory Jones in the first quarter.

Valladay added a 2-point conversion to pull the Sun Devils within 10 points, and Arizona State recovered the ensuing onside-kick attempt. However, an illegal block on the recovery negated the play and quashed any hope of a Sun Devils rally.

Dye put the win away with his second score of the night, a goal-line carry. Dye led USC with 62 yards on 13 rushes, while Williams added 44 yards on eight carries, including his 1-yard touchdown run on a sneak to cap the Trojans' game-opening drive.

Williams finished 27-of-37 passing for 348 yards, 105 of them to Jordan Addison on eight catches. Mario Williams caught five passes for 50 yards and a touchdown, and Malcolm Epps' lone catch went for a score of four yards.

Jones finished 23-of-32 passing despite the pressure and finished with 243 yards, but got little help from the Sun Devils run game.

Arizona State finished with 88 net yards on 29 carries for its second consecutive game failing to reach 100 yards on the ground. The Sun Devils totaled just six in their Week 4 loss to Utah.