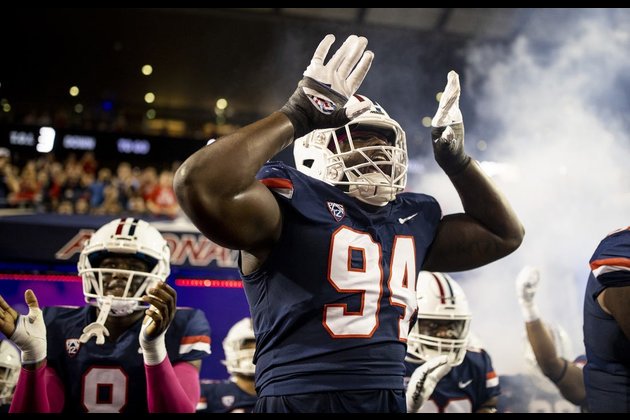 The Wildcats' yardage total was their most ever against a Pac-12 foe, eclipsing the 670 they gained against Colorado in 2013.

Arizona running back Michael Wiley caught two touchdown passes and ran for a team-high 77 yards. Jacob Cowing led the receiving corps with career highs in catches (12) and receiving yards (180) and a touchdown. Dorian Singer added nine catches for 163 yards and a score, while Tetairoa McMillan also found the end zone on five catches for 90 yards.

de Laura completed 33 of 46 passes without an interception. Colorado true freshman quarterback Owen McCown, making his second career start, was 14 of 30 for 186 yards and a touchdown.

Arizona scored on its two first possessions, going up 13-7 when de Laura connected with Cowing late in the first quarter on a 3-yard pass on fourth-and-goal.

Arizona scored two more touchdowns in the second quarter as de Laura found Singer and Tanner McLachlan on scoring throws to extend the lead to 26-7. Colorado inched closer on McCown's 14-yard pass to Daniel Arias with 1:05 left in the half to make it 26-13.