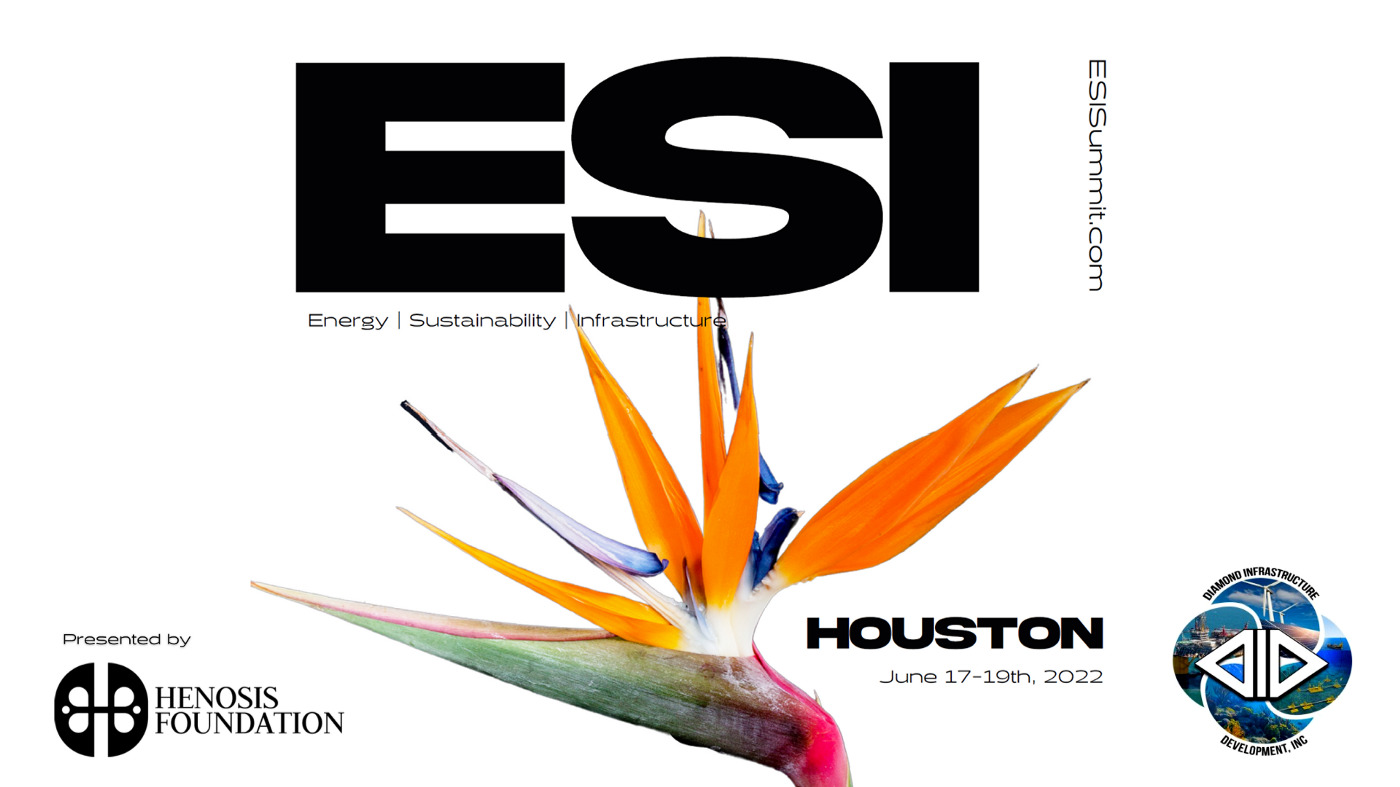 As many are aware, it is the time for innovation in our energy space, and for acting boldly to advance solutions. With hydrocarbons supplying over 60% of the world's energy, since 1995, the total world energy production has nearly doubled (~95%). Fossil fuels supply around 71% of energy usage, with the remaining renewable energy being broken down into 6% wind, 17% hydropower, 3% solar, and 3% others.

With the recognition that our current energy practices are not sustainable and with the understanding that energy is a major contributor to our current environmental crisis, after months of research and collaboration, the Henosis Foundation (HF) is proud to introduce the "Energy, Sustainability, and Infrastructure (ESI) Special Summit".Henosis was created to work in tandem with the 17 Sustainable Development Goals (SDGs) set by the United Nations. These goals, serve as a shared blueprint for peace and prosperity for people and the planet, now and into the future, and include building resilient infrastructure, promoting inclusive and sustainable industrialization, and fostering innovation.The "ESI Special Summit" was founded to achieve quantifiable progress when leadership, commerce, science, technology, public and private investment act in coordination to respond to major global challenges. The weekend-long event will assemble "Only 100" selected world-class influential leaders, meeting the summit's stringent selection process, in the energy and infrastructure industries to participate in solutions for the energy sector at its highest levels. One such challenge being the immediate need for an innovative, rapidly deployable worldwide, commercially feasible alternative energy solution. As everyone should know by now, no such solution exists or is currently available in any such form.

So, all you captains of industry, powerhouses behind the world's largest foundations along with the largest private and public corporations, look forward to your private invitational to this Global, First of its kind Special Event!

After much research, Henosis has selected Diamond Infrastructure Development, Inc. (DIDI) for their astute solution/solutions to these pressing energy deficiencies.

Texas' own DIDI, a groundbreaking force in the alternative energy sector, led by Georg Engelmann, President, and CEO, as well as Board Member with Kenneth W. Welch Jr., prolific Inventor, Founder, and CEO of Global Oceanic Designs, Inc. and, SeaDog Systems, Inc., will be featured as "Key Innovators" at this year's summit.

This partnership, forged to be one for the ages, as Henosis Foundation (named after Ancient Greek: ἕνωσις) meaning mystical "oneness", "union" or "unity" has the Mission to create an Equilibrium between Humans and their Environment.

ESI, aimed to be an "Inaugural Yearly Summit" is being developed to assemble, the most influential leaders in the Energy, Infrastructure, and Development Industries along with the strength and support of the Global Foundations directed by HF, to advance innovative global solutions for the current environmental and climate crisis, providing a clear and direct future, for our children's children, as the ever-changing world Advances.

The theme for the 2022 ESI Special Event Summit was inspired by "The Bird of Paradise". The Bird of Paradise Flower symbolizes freedom, identity, glamour, faithfulness, joy, and paradise. This unique flower exemplifies the spiritual force needed to improve the state of our world.

The bird of paradise is sometimes called a crane flower because it resembles an elegant, long-necked bird. Its long stem and colorful blossoms resemble a bird with a pointed beak and tuft of colorful flowers on its head.

These magical flowers grow in bunches that resemble a flock of vibrant tropical birds who are ready to take flight. Hence, the bird of paradise flower is a symbol of freedom.

This year's Special Summit will offer Global insights into the key issues/challenges currently hindering forward progress, along with the inherent problems, associated with the systems being deployed, followed by HF & DIDI's in-depth solution.

As experts have noted, solar and wind facilities can have a harmful impact on the environment and can't be sustained on a large scale. The production of solar and wind facilities often creates a greater carbon footprint than many realize, leaving behind pollutants with no means of decomposing. In addition, toxic rare earth mining, combined with China's geopolitical control that comes with such mining and trade only enhances the problematic aspects further. And lastly, the equipment that powers these alternative energies is often plagued by low reliability.

Wind turbines produce little or no power around 60% of the time. Onshore wind farms would need over 247,000 acres of land to produce the equivalent of a standard 3 GW power plant. The materials for making the turbine blades are largely not recyclable.

The process of destroying the turbines, cutting, and grinding them as well as trucking them to landfills, adds to their overall carbon footprint. Additionally, they only last 15 to 20 years before you need to replace the entire system (this is more like a throw-away product than a sustainable one).

Moving on, solar panels only have efficiencies between 15% to 20% and leach toxic chemicals as they age, having similar high maintenance, disposal & lifespan issues.

Alternative energies, like solar and wind, also have a very high-capacity cost per megawatt and underreported deficit capacity factors. The industry states deficient capacity factors lead to low avoided emissions and low avoided energy cost per dollar invested. This means the burden on taxpayers to create these facilities simply isn't worth it.

Government subsidies and incentives hide the actual costs of wind turbines. China is currently the world's largest wind and solar energy producer and system supplier. The country has accrued a total debt of $42 billion and is growing because of ongoing subsidy payments.

The "Build Back Better" bill debated in the US Congress would provide $320 billion in Clean Energy Expanded Tax Credits over 10 years, and one might ask why don't they just build power plants with the capital instead of wasting the funds on throw-away power products that don't provide profit without taxpayer free money.

The bill could increase the budget deficit by $367 billion over ten years. Hence, "Free" solar panels would in actuality be produced with taxpayers ' money, whether they decide to install them in their homes or not.

DIDI has been selected by HF to present alternative solutions to the complex issues facing our world today, as outlined above.

They will be introducing their advanced Hydropower Systems, including the SeaDog Wave Energy Carousel and other technologies developed by Global Oceanic Designs, Inc., & SeaDog Systems, Inc. related to global energy and infrastructure technologies.

Their dynamic systems provide a truly clean, recyclable, cold, grid-scale wave energy-driven hydropower network, that works in the same order, if not better, than the current economic and fiscal efficiency of hydroelectric dams, "Without the Dam". These proprietary systems offer another feature, they work "On or Offshore".

Systems that evade the numerous environmental impacts of dams or the disastrous consequences caused by large-scale dam failure along with other risks are also involved in stored/pumped hydro facilities. Innovative designs that will "Re-Write the Future of Hydroelectric Power".

Henosis foundation will be showcasing this truly disruptive technology on the leading edge of alternative energy, along with a special announcement of its grid-scale, onshore, wave energy production system... a Global First!

Henosis Foundation's ESI summit 2022 will enable leaders to chart a clear vision along with an informed future course for their organizations. The goal of the ESI Summit is to converge the best and brightest manufacturers, implementers, and developers to foster solutions/alliances with those in attendance. Solutions to deliver new world changes, that will alter the course of the Global energy movement, offering a more robust, stable, and sustainable power/water system, for future generations.

The ESI Summit will prove to be a weekend of clarity, idea generation, renewed vision, networking, and fun! This Special Summit will also feature a Gala with well-known entertainers, great food, an open bar, well-appointed guest rooms, and amenities, held at the internationally acclaimed Four Seasons® Hotel, with their quality and highly personalized service. This invite-only Special Summit will soon be shared with a select group of industry leaders within the coming weeks.

HF & DIDI, along with National Media, will be providing an in-depth, industry-wide story documenting the summit's progress in helping the World to achieve a more sustainable energy/water future aimed at the needs of the Global population.

"Innovative Technologies for a Better Tomorrow"

This content is published on behalf of the above source. Please contact them directly for any concern related to the above.

Former U.S. President George W. Bush has made an embarrassing mistake in criticizing Russian President Vladimir Putin over his decision ...

WASHINGTON D.C.: The U.S. State Department has announced the launch of a new program to capture and analyze evidence of ...

Popularity of Indonesian president sinks due to price rises

EAST JAVA, Indonesia: A tourist bus crashed into a billboard on a highway on Indonesia's main island of Java this ...

BELGRADE, Serbia: Belgrade was paralyzed this week by a series of bomb threats, including against schools, bridges, restaurants and a ...

WASHINGTON D.C.: In a tweet this week, Amazon founder Jeff Bezos criticized President Joe Biden for the second time in ...

SYDNEY, NSW, Australia - A reduction of the official lending criteria in China has boosted stocks on the mainland, and ...

Turkish lira falls another 2%, at lowest since December

ISTANBUL, Turkey: As state lenders reduced the amount of dollar sales to prop up the currency for the ninth consecutive ...

US trader faces 20 years in prison over cryptocurrency scam

Face masks return for workers at some Michigan auto factories

Drag Me to Hell

Drag Me to Hell