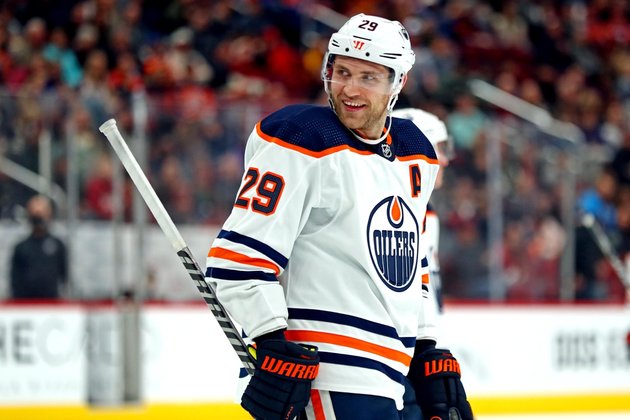 The Edmonton Oilers will play their 20th game of the season on Saturday afternoon when they finish up a three-game road trip with a Pacific Division showdown against the Vegas Golden Knights at Las Vegas.

Normally playing the 20th game during an 82-game regular season isn't a big deal. But thanks to the play of Oilers forward Leon Draisaitl this one is.

Draisaitl, who had two goals and two assists in Edmonton's 5-3 victory at Arizona on Wednesday, leads the NHL in points (40), goals (20), power play goals (10), game-winning goals (six) and multiple goal games (eight). He's also the first player to hit the 40-point mark before the 20th game of the season since Mario Lemieux and Jaromir Jagr did it in 1995-96.

But it's Draisaitl's early goal scoring that is even more impressive. With 20 goals in just 19 games, he's on a pace to become the first player since Brett Hull in 1991-92 to score 50 goals in 50 games, a feat that has been accomplished just eight times in NHL history, including three times by Wayne Gretzky.

"I think it's a little crazy to think I'm going to score 50 goals in 50 games," he said. "Obviously, right now pucks are going in for me, but this is a tough league to score in, so I don't expect to hit that stat at all. I'm going to keep shooting. If they go in, great. But I know there are going to come times where they're probably not going to go in."

Tippett shuffled his lines after a 4-1 loss at Dallas on Tuesday and put Draisaitl on a line with Connor McDavid, who is second in the NHL in scoring with 36 points and ranks among the league-leaders with 14 goals, and Zack Kassian. The line combined for 11 points.

"Obviously, playing with No. 97 (McDavid) makes it a lot easier," said Draisaitl. "There's a lot more free ice with him out there."

Vegas returns home after splitting a short two-game road trip that began with a 5-2 loss at St. Louis and ended with a 5-2 victory at Nashville on Wednesday. That contest marked the return of wingers Max Pacioretty, who missed 17 games with a fractured foot, and William Carrier, who was in COVID protocol.

Pacioretty picked up an assist on an empty-net goal by Mark Stone that sealed the victory over the Predators.

"He's a thoroughbred as players go," Vegas coach Peter DeBoer said of Pacioretty, who led the team with 24 goals last season and has scored 306 goals in his career. "He had a non-weight bearing injury that he basically had to stay off of for five weeks so he wasn't allowed to do anything. He's had a week of skating and he jumps in, played 17 minutes, looked really good. Not many guys can do that."

Center Jonathan Marchessault, who leads the Golden Knights with nine goals, returned to practice on Friday after spending 10 days in COVID protocol.

LONDON, England: The British Broadcasting Corporation (BBC) faces a major financial setback following a recent announcement by the government to ...

US Supreme Court to rule on religious rights of football coach

WASHINGTON D.C.: The U.S. Supreme Court said it would hear an appeal from a former high school football coach who ...

One of world's oldest gorillas put to sleep at Atlanta Zoo

ATLANTA, Georgia: Zoo Atlanta's gorilla, one of the oldest in captivity at 59 years, was euthanized on January 13 due ...

COPENHAGEN, Denmark: An official at the highest level of the Denmark government has been charged with leaking state secrets. Claus ...

LONDON, England: In a statement on January 17, Amazon UK said it has canceled plans to stop accepting Visa credit ...

SYDNEY, NSW, Australia - Stocks in Asia were mixed on Wednesday. The biggest move was the Japanese market which saw ...

UK imports to Ireland fell, trade with N. Ireland up due to Brexit

DUBLIN, Ireland: Since Brexit went into effect in 2020, Ireland has witnessed a 20 percent decline in goods exported from ...

At 3.45%, mortgage rates highest in US since pandemic struck

WASHINGTON D.C.: According to a closely watched survey, U.S. mortgage rates have reached levels not seen since March 2020. In ...

PIEDMONT, Italy: Earlier this month, a case of African swine fever, which can be deadly to pigs but harmless to ...