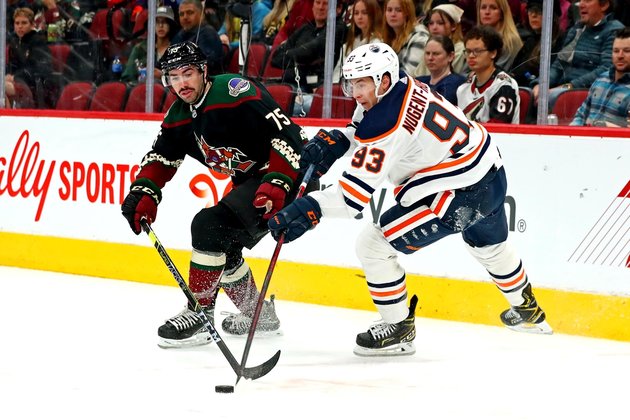 Edmonton's stars delivered Wednesday as Leon Draisaitl and Connor McDavid each had two goals with two assists as the Oilers got back on track with a 5-3 victory over the Arizona Coyotes in Glendale, Ariz.

McDavid's first assist was the 400th of his career in 426 games, making him the fourth fastest to that milestone in NHL history.

Zack Kassian also scored a goal as the Oilers rebounded from a 4-1 defeat at Dallas on Tuesday. In the contest against the Stars, McDavid's 17-game point streak dating to the start of the season ended, as did his 25-game streak going back to last season.

Mikko Koskinen made 24 saves for the Oilers, who won for the third time in their past four games and are 1-1-0 on a three-game road trip.

Clayton Keller, Travis Boyd and Shayne Gostisbehere scored goals for the Coyotes, and Keller added two assists. Scott Wedgewood record for 39 saves for Arizona, which was held without a point for the first time in five games.

The Coyotes got off to a fast start when Keller scored 3:45 into the game. On a two-on-one with Phil Kessel, Keller got the puck past Koskinen for his fifth of the season.

The Oilers got even at 14:48 of the first period when McDavid cleaned up a loose puck in front of the Coyotes goal to score on a power play. Draisaitl had the primary assist.

Edmonton moved in front at 10:53 of the second period when Draisaitl scored his first of the game. Draisaitl squeezed a shot from the right circle between Wedgewood and the right post.

Draisaitl gave the Oilers a 4-1 lead with a power-play goal at 13:08 of the third, his NHL-leading 20th tally. Boyd answered 35 seconds later for Arizona with his fourth and Gostisbehere scored his third at 15:06 before Edmonton held on.

McDavid scored an empty-netter, his 14th goal of the season, with 27.5 seconds remaining.

KABUL, Afghanistan: Under new rules imposed by the Taliban government, women have been banned from appearing on television dramas in ...

DHAKA, Bangladesh - On Tuesday, a Bangladeshi Vijay Dutt (40), known as 'Momin,' was apprehended for running a sex racket ...

VERACRUZ, Mexico: Mexican authorities discovered more than 400 migrants in the back of two semi-trailers on November 19, traveling near ...

BASSE-TERRE, Guadeloupe: Protests against COVID-19 restrictions erupted into rioting and looting for the third consecutive day on the Caribbean island ...

VILNIUS, Lithuania: China has downgraded its diplomatic ties with Lithuania from ambassador to charge d'affaires level, in retaliation for Lithuania ...

EV chargers will be required in new UK homes by 2022

LONDON, England: Beginning in 2022, electric vehicle (EV) charging stations will be required in all new homes and businesses in ...

TORONTO, Ontario: Online food ordering firm Uber Eats has announced its alliance with Tokyo Smoke to enable the purchase of ...

TEMPE, Arizona: The email addresses of up to 1.2 million WordPress customers were stolen on November 17, web hosting company ...