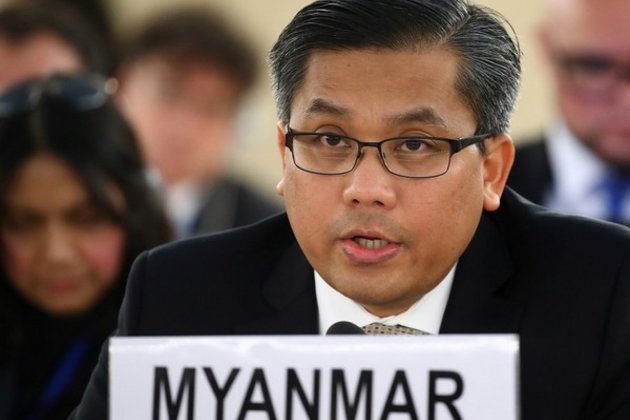 New York [US], March 3 (ANI): Amid reports of being fired, Myanmar's Ambassador to the United Nations, Kyaw Moe Tun on Wednesday sent letters to the world body insisting that he remains the legitimate representative of his country, reported NHK World.

In the letters dated Monday, Kyaw Moe Tun wrote, "The perpetrators of the unlawful coup against the democratic government of Myanmar have no authority to countermand the legitimate authority of the president of my country."He claimed he remains Myanmar's permanent representative to the United Nations and rejected the country's military takeover.

US State Department Spokesperson, Ned Price, said at a news conference on Tuesday that the US government commends the bravery shown by Kyaw Moe Tun. He said the government understands that he remains in his position.

Earlier on Friday, Kyaw at a UN General Assembly meeting condemned his country's military for seizing power in a February 1 coup.

He called on the international community to "use any means necessary" to reverse the coup, reported NHK World.

Myanmar's state-run television reported later that the ambassador was fired for betraying the country.

A UN spokesperson revealed that Myanmar's foreign ministry had notified the world body that the country had appointed the current deputy ambassador to temporarily fill the role, reported NHK World.

The military coup of February 1 has halted Myanmar's tentative steps towards democracy after nearly 50 years of military rule and has drawn condemnation and sanctions from the United States and other Western countries, and growing concern among its neighbours.

The coup saw civilian leaders including Aung San Suu Kyi detained. For weeks, thousands of people in the country have come out to protest, risking deadly violence and arrest by security forces. (ANI)

ISTANBUL, Turkey: Turkey has arrested ten former admirals who criticized a government plan to build a canal to the Mediterranean ...

23% of U.S. elderly need to be vaccinated, says White House

WASHINGTON D.C.: The Biden administration has voiced concern over the slowing pace of senior citizens, aged 65 and older, who ...

ROME, Italy: As Covid-19 rages throughout Europe, Italy recorded 344 coronavirus-related deaths on Saturday and 718 the day before. However, ...

ROME, Italy: Italian restaurant owners clashed with police earlier this week during a demonstration outside Parliament in Rome, as they ...

Hwy 1 at world famous Big Sur to reopen after landslide

SYDNEY, NSW, Australia - Stocks in Asia opened the week in the red on Monday with all the major indices ...

TAMPA, Florida: The state of Florida has filed suit to block a Centers for Disease Control and Prevention's decision to ...

WASHINGTON D.C.: As the economic activity in the United States recovers faster than that of its rivals, the nation's trade ...

DETROIT, Michigan: General Motors is currently working on cutting the cost of electric vehicle batteries, as well as their reliance ...

MIAMI, Florida: Carnival Corp, the world's largest cruise operator, is refraining from picking sides on the question of making COVID-19 ...

American Murder: The Family Next Door