California Moves to Vaccinate All Residents Over 65 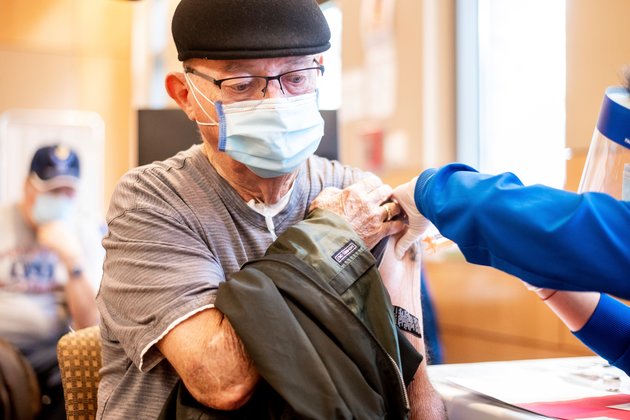 The U.S. state of California announced Wednesday that all residents over age 65 would be eligible for the coronavirus vaccine.

"There is no higher priority than efficiently and equitably distributing these vaccines as quickly as possible to those who face the gravest consequences," Governor Gavin Newsom said in a statement.

The move prioritizes the elderly over emergency workers and teachers.

Meanwhile Wednesday, governors in Ohio and Arizona urged teachers to be vaccinated to facilitate reopening schools.

"We will not be funding empty seats or allowing schools to remain in a perpetual state of closure," Arizona Governor Doug Ducey said Wednesday. The state has already begun vaccinating some teachers.

Sorry, but your browser cannot support embedded video of this type, you can download this video to view it offline.

The U.S. set another single-day record in COVID-19 deaths Tuesday with 4,327, increasing the nation's overall death toll to a world-leading 384,000 people as of Wednesday evening. The U.S. also leads in the overall number of coronavirus infections with 23 million out of the world's 92 million total cases, according to data from the Johns Hopkins University Coronavirus Resource Center.

Across the Atlantic, Portugal enacted a nationwide lockdown Wednesday amid surging coronavirus cases after easing restrictions over the holidays. Portugal has confirmed just over half a million cases.

Elsewhere, China recorded its highest daily increase of new coronavirus infections since July after a recent cluster of cases in northern Hebei province.

The National Health Commission reported 115 new cases Tuesday, with 90 cases in Hebei province, which surrounds Beijing. The commission also said 107 of the new cases were local transmissions, the highest daily jump since July 30.

Officials in Hebei province have ordered a lockdown of several cities, while authorities in northeastern Heilongjiang province, which posted 16 new cases, have declared an "emergency state" for the entire province and its 37 million residents.

Meanwhile, Brazilian researchers say a COVID-19 vaccine developed by China's Sinovac Biotech was shown to be just over 50% effective overall after large-scale human trials in that country, far below the 78% efficacy rate against mild to severe cases announced just last week.

Researchers said the most recent data included results from a group of participants who reported "very mild" cases of infection, which explains the huge discrepancy between the two figures.

The Sinovac vaccine has been approved for emergency use by Indonesia, where President Joko Widodo received the first inoculation Wednesday. The shot launched the Southeast Asian nation's drive to vaccinate its 181 million citizens, who are spread out across the vast archipelago. Indonesia has one of the region's worst COVID-19 outbreaks, having recorded 858,043 total infections, including 24,951 deaths, according to Johns Hopkins University.

Japanese Prime Minister Yoshihide Suga announced Wednesday that the government was expanding a state of emergency to seven other prefectures in central and western Japan to curb an escalating surge of new coronavirus cases. The new decree, which takes effect Thursday and remains in effect until February 7, will cover Osaka, Kyoto, Hyogo, Fukuoka, Aichi, Gifu and Tochigi.

Wednesday's declaration came more than a week after Suga issued an emergency declaration for Tokyo and the neighboring prefectures of Saitama, Chiba and Kanagawa. Japan has recorded 302,740 infections, including more than 4,000 deaths.

On Friday, January 22, 2021, the Treaty on the Prohibition of Nuclear Weapons (TPNW) became international law for the 122 ...

Since September, the devastation wrought by the COVID-19 pandemic has deepened, infecting close to 100 million people, costing more than ...

President Joe Biden has issued an executive order that overturns a ban on transgender people serving in the U.S. military.In ...

NEW DELHI, India - India and China have agreed to push for an early disengagement of the frontline troops in ...

PanARMENIAN.Net - There is some evidence that a new coronavirus variant first identified in southeast England carries a higher risk ...

SYDNEY, NSW, Australia - Stocks in Asia were mixed on Wednesday.Japan's Nikkei 225 eked out a small gain despite concerns ...

IMF predicts Indian economy to grow at staggering 11.5 per cent

New Delhi [India], January 27 (ANI/Big News Network): India will reclaim the status of the world's fastest-growing economy, and will ...

NEW YORK, New York - U.S. stocks were out of favour on Tuesday with the main indices drifting lower.At the ...

NEW DELHI, India - After clashes between protestors and police in several parts of Delhi, farmers on Tuesday, the Samyukta ...

WASHINGTON, DC, January 26 (ANI) - The U.S. Senate has confirmed Janet Yellen to be the next Secretary of the ...