NANJING, CHINA / ACCESSWIRE / September 9, 2019 / ELFSACK, a Chinese clothing brand, made its debut at the New York Fashion Week at 3:00 p.m on September 7, 2019. With its distinctive and highly recognizable presentation of the domestic fashion, it became an eye-catcher highly praised by the audience and the media.

Founded in 2006, ELFSACK is well known for apparel products with scintillating colors and patterns. Apart from its proprietary B2C and foreign trade B2C, stores in Tier 1 and Tier 2 cities as well as many domestic E-commerce platforms have become its marketing channels.

Ever since it got involved in cross-border E-commerce in 2014, the brand has registered trademarks in more than 30 countries around the world as a solid foundation for its international development.

The New Domestic Fashion Featured by 'Innovation Based on Tradition'

Inspired by 12 zodiac animals in the oriental culture, ELFSACK, themed by 'Innovation Based on Tradition', presented its creative series, such as 'Mahjong Sheep', 'Zodiac Tiger', 'Meiling Mouse', 'Crop Growth', 'Old Stuff' and 'Flying Tiger'. They collided with court patterns in the western religious culture, such as famous mythical oil paintings and court totem scenarios. Chinese domestic fashion elements and western Gothic costume details were combined to put on a 'stage show' of the combination of Chinese design with the Western one.

Texture and comfort were the focus to select fabrics for these products. Vintage jacquard, lustrous silk, mellifluous mesh and chiffon, combined with the lively printing, made them look ceremonial and practical. This coincided with New York Fashion Week's philosophy of 'focus on natural style and create a digestible and seemingly effortless fashion with American professionalism' combining artistic aesthetics with customers' wearing experience.

The matching of Chinese robes with bell-bottom trousers, the collision between mesh and jeans, the echo between metal and satin, delicate and charming colors, traditional but fashionable buckles. Such a bold and romantic interpretation of fashion made every detail of the show brimming with ELFSACK's DNA.

The 'Meiling Mouse' series, among others, was particularly conspicuous. This series was reportedly a joint version of the works exhibited by Nanjing Museum. The works of national artists were vividly presented on clothing through secondary design, making the domestic fashion more interesting.

Through creativity, Chinese and western elements were inherited and innovated, wherein nature, art and humanity collided with each other, paying tribute to both the domestic fashion and the world culture.

'New Self' in Design Attitude

ELFSACK believes that 'clothing is entertainment, culture or attitude but not any follower.' Therefore, brand design does not hew to the line. It is like a Pandora's box full of surprises. Every series carries a scintillating theme. Mountains and rivers, stars and ancient legends, all can be inspirations. With its enthusiasm, boldness, freedom, romantic vitality and unique aesthetics, a brand always makes customers feel the new self in their wearing attitude.

With the launch of the 'Innovation Based on Tradition' series, ELFSACK further explained the 'new self', injected its consideration about the self-iteration and globalization pattern of Chinese clothing brands, and reflected the common mind of brands and contemporary young women: Young and Dreaming. The 'new self' is 'good at dialogue with the past, but not superstitious about old rules, believing that self-iteration is a great ability with a lasting sense of innovation and forming one's own attitude, belief, aesthetics and culture at the junction between majority and minority.' 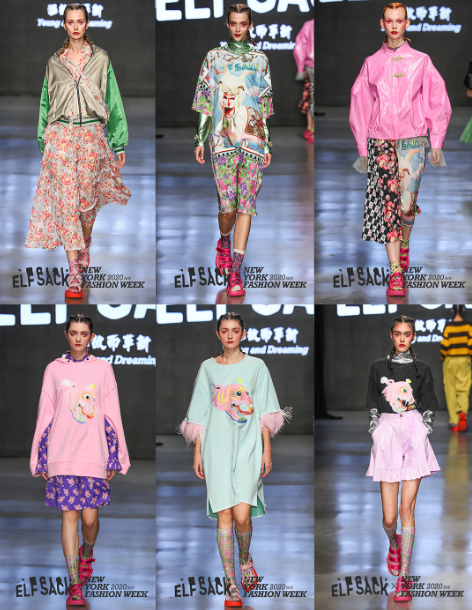 As the main force in market consumption is getting younger, the demand for personalized products from all walks of life is growing day by day, especially for fashion brands. As people's in-depth understanding of themselves becomes a trend, this means that brand actions to express demands and affirm consumers' core values are essential. When it comes to brand marketing, ELFSACK persists in 'telling stories with products', takes culture as its foundation and 'creating value' as its starting point. Through the development of personalized brand culture, cross-border cooperation, social media and other advertising services, ELFSACK drives 'sales power' with 'cultural power', provides products and services urgently needed by young customers, and brings recognition and pleasure to customers.

In the context of cultural globalization, young customers are fonder of commodities resonating with them. According to a survey by McCarthy Group, 84% of millennials does not like or trust traditional marketing. A study published by Adweek shows that 57% of millennials are willing to check product contents from a brand as long as it contains real personality, entertainment and practicality. To sum up, they prefer products with spiritual identity.

ELFSACK has been working with international IPs, including Sesame Street and Betty Boop, since 2017. It picks out the match with the brand from the spiritual core of each IP. Through in-depth interpretation of different styles of products, it transforms and sublimates fashion individualization into the cultural core of women's new self and touches consumers' minds with content and wearing taste. With the aid of derived products like household clothing, fashion socks, cultural products, it creates a brand ecosystem, pushes forward the rejuvenation and fashion strategy, and attract new and existing customers with such elements as uniqueness, design sense and cultural magnetic field.

In 2018, ELFSACK opened its first store in China with new retail thinking. Fun and experience are the key words emphasized by ELFSACK. As a 'new retail pioneer' brand under the new consumption situation, it stands out with persistence in its unique brand culture and marketing culture. Liu Qing, founder and CEO of ELFSACK, said that 2019 would be ELFSACK's year of 'cultural appreciation'. In advantage of the its cultural connotation, in combination with in-depth contents, fashion trends, cross-border development of domestic fashion, channels and markets, the brand would transform 'culture', known as a common failing and short board for Chinese brands, into a huge space for value growth. In this year, ELFSACK will not only continue its existing brand attributes and culture, but also enable the culture of the Chinese brand to 'go global' through more creative series, IP cooperation series, New York Fashion Week and other events, with a constant rendering of the brand value of 'creating surprises for interesting people'.

From online to offline, it has honed itself at the forefront for 13 years. In virtue of this Fashion Week and the fashion pattern brought by the brand's creativity and in consideration of cultural output and commercial expansion, ELFSACK has found an outlet to globalization and will go to another golden age. Not content with a 'one-off' overseas voice, ELFSACK will definitely be an internationally influential brand.

We also expect the Chinese clothing brands represented by ELFSACK, while continuously promoting the development of fashion economy, to increasingly shape the 'cultural magnetic field' for the Chinese fashion industry.

On Friday, January 22, 2021, the Treaty on the Prohibition of Nuclear Weapons (TPNW) became international law for the 122 ...

Since September, the devastation wrought by the COVID-19 pandemic has deepened, infecting close to 100 million people, costing more than ...

President Joe Biden has issued an executive order that overturns a ban on transgender people serving in the U.S. military.In ...

NEW DELHI, India - India and China have agreed to push for an early disengagement of the frontline troops in ...

PanARMENIAN.Net - There is some evidence that a new coronavirus variant first identified in southeast England carries a higher risk ...

SYDNEY, NSW, Australia - Stocks in Asia were mixed on Wednesday.Japan's Nikkei 225 eked out a small gain despite concerns ...

IMF predicts Indian economy to grow at staggering 11.5 per cent

New Delhi [India], January 27 (ANI/Big News Network): India will reclaim the status of the world's fastest-growing economy, and will ...

NEW YORK, New York - U.S. stocks were out of favour on Tuesday with the main indices drifting lower.At the ...

NEW DELHI, India - After clashes between protestors and police in several parts of Delhi, farmers on Tuesday, the Samyukta ...

WASHINGTON, DC, January 26 (ANI) - The U.S. Senate has confirmed Janet Yellen to be the next Secretary of the ...